It was an exciting week for students during Science Week 8th -12th March.

Students were given the task to build a “space shuttle” that would protect an egg from a free fall drop at 10 metres.

Students spent their first lesson designing and planning how they would build their shuttle. The common talking points that came up between students were; “how to protect the egg” “surface area for the landing” and the  “weight of the shuttle”. 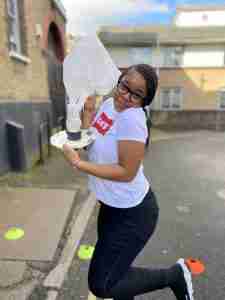 Students built their shuttles with the equipment and items provided. The shuttles were dropped one at a time and students were then asked to answer these 4 questions.

After completing the questions student were given 1 final lesson to improve or/and redesign their shuttle after making observation notes from the first drop. Some students decided to start again and others altered their previous shuttle slightly.

This was a great experiment for our students to mark British Science Week.

Your email address will not be published. Required fields are marked *

Arco Academy is a a sports specialist Independent school offering an alternative education to students referred by their schools. Our purpose is to unleash the potential we know exists in all our students and strive to empower them to be the best versions of themselves.

I would really like to praise Arco Academy for their outstanding service, and their delivery of activities which were tailored to what we as a school asked for. It was so clear to see that the activities that they chose to demonstrate were thoroughly thought out, and planned according to the needs of our students. The students really enjoyed themselves and were so enthusiastic throughout the day. We sent 10 of our most difficult to reach students and the programme kept them engaged throughout… END_OF_DOCUMENT_TOKEN_TO_BE_REPLACED

Arco has been able to combine both an academic and wellbeing personal and wellbeing development programme for our students, and evidence has shown that they have made progress in both areas.

Thank you all Arco for all your hard work, support & patience you have all put into my son. I thank you for helping me & my family push him on to great things and to realise he’s inner potential we all knew he had. I to had to learn to trust the process & have also grown as I have worked with you guys. I couldn’t of trusted a better process and bunch of kind hearted and professional set of people with my child. I will forever be thankful for you guys. My son will keep in touch & will continue on… END_OF_DOCUMENT_TOKEN_TO_BE_REPLACED

Many thanks to all staff at Arco Academy. They are very experienced and understanding in meeting the needs of the students by giving adequate support both morally and mentally for their future. I am very grateful.

I would like to say thank you all so much for everything you have done for my son and myself. You have all been amazing. Over the time he has been with you he has come out of his shell and talks to me more. I’ve seen more positive changes in the time he’s been at Arco, all thanks to your help. You are truly amazing.

Hope can flower in the most unlikely places. To be very honest, I did not expect to be getting awards at all. I sort of lost all hope but students and teachers at Arco have taught me to believe in myself. I am forever grateful!